You can view the entire 50-30-20 MoneyPlan series as one document here.

Why Everyone Needs a 50-30-20 MoneyPlan:  Americans Spending Too Much on Fixed Expenses

In 1972, the average family had only one spouse working, but even with just that one paycheck, they only spent 54% (a little over half) of their income on fixed expenses – that is, expenses that had to be paid each month, like the mortgage, insurance, basic food, any car loans, debt payments, etc. By 2005, the average family had both spouses working, yet they spent a whopping 75% (three-quarters) of their income on fixed expenses.

Why is this critically important?

It is important because it makes the average family today much more financially vulnerable. In the past if something went wrong, such as a job loss or illness, the 1972 family only had 54% of income going to fixed expenses that they couldn’t quickly or easily cut back. The other 46% was discretionary / optional spending. It was spending on things like eating out at restaurants, movies, fashion clothing, and vacations that could immediately be cut back.

In many cases, unemployment insurance paid over 55% of one’s previous income, so from that alone many families could get by because they only had to cover fixed expenses of 54% until another job was found. They could weather the job loss without having to resort to debt, which can spiral out of control and ruin a family. In addition, in 1972 typically only the husband was working, so there was a spouse in reserve who could go into the workforce to make up for a lot of the lost income. 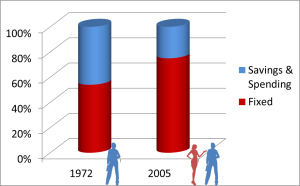 By contrast, the average family of 2005 had 75% of its income going towards fixed expenses like the mortgage, insurance, and car payments that cannot be quickly or easily cut. All that they can cut back immediately (or anytime soon) to cope with the crisis is a mere 25% of their expenses. They can eat all the generic macaroni and cheese, and drink all the grocery store coffee they want, and not spend a penny on clothing and entertainment, but all it will do is cut their expenses by 25%, at most, and that’s usually not enough to weather the loss of a spouse’s income without having to eat up savings or take on debt.

The typical family of today doesn’t have a spouse in reserve that could enter the workforce if necessary. They don’t have the option of sending the wife into the workforce to help cushion the blow of the husband’s job loss, because the wife is already in the workforce. And even with two incomes, they are still spending 75% of their earnings on fixed expenses: expenses, again, like the mortgage that cannot quickly or easily be cut back.

So you can see it’s much harder for a family today to weather something going wrong without depleting savings and/or resorting to debt which can spiral out of control.